March 13, 2015
So, I am writing this one now… I have tried recording video a couple of times.  I tried outside as the weather is getting better, and both times audio became a problem.  I want to get out of the basement….. giving up on video for a bit until I figure out a better solution.

Overall, things are good.  I am keeping busy and not getting into too much trouble.  Energy reserves are still low, but that was to be expected.  I have been working on things to keep my mind busy as I still feel that I need to work on my mental game, more than physical.  My body keeps fighting, and so my mind feels as though it has little to do.

Recently I had some discussions with a number of people about social media and its marketing value.  As I am helping multiple groups with different events, I have the opportunity to compare them against each other in how they would approach to a potential sponsor.  I think that I have developed a better understanding of what a company wants, and I think I see a number of flaws in what many groups do for fundraising.

One of the key components when asking for sponsorship will be the value to the potential sponsor.  I have one group that is adamant that their social media following has great value because of the high number of Facebook likes on a niche market page.  I, who may be known for being contradictory on occasion, refuted that argument on the grounds that even though the Facebook page and the potential sponsor were in similar categories, the sponsorship would not result in additional business for the sponsor, because the Facebook page likes are not new customers – they are people that are already in the target demographic – you can’t sell very many items of a non-consumable product to those that already have them.

Another perspective is that the internet provides marketing to the world, but how do you target your local region?  A social media following of 10,000 on twitter is around the world – how do you get them to walk into the store in your region?  This is critical to trying to get single brick and mortar location to obtain value from a sponsorship deal with you.  The business wants to try and get people into their reach, and so smaller companies can’t gain value.

One of the areas that the world wide reach does do well is for fundraising.  I have followed some different YouTube vloggers over the recent years.  Usually someone would send me a link to a video and I would subscribe and check back everyone once in awhile.  Recently, a YouTuber from outside Winnipeg, posted about his Uncles battles with MS. Josh reached out to his fan base of (at the time) over 25,000 YouTube subscribers from around the world, and almost raised $10,000 in very short order.

Fundraising using social media is also still a bit of a challenge.  Although you can reach more people than you could have in the past, just like marketing a business, how do you get them to click on the “donate now” button?  You are, in essence, marketing yourself as the product to the potential client or sponsor.  Everyone is asking for money these days, how do you make it so your efforts get a piece of it?

There lies the challenge of the future.  I know that a number of charities are always asking for money……. Let us face the reality – everyone probably has someone on their friends list post a link on their page, asking for your hard earned cash every week.  That is the reality of fundraising via social media – it is easier for people to hit a larger audience faster than ever before. At the same time, everyone is feeling the pinch of more people asking for donations.

In a marketing class, this is what they term "a call to action". There needs to be that hook that drags you into the webpage, and holds you there long enough that you will pull out your credit card before you get away.  What calls to action do you find work best and gets your hard earned dollars?

Talking to different people, I have asked opinions about how they choose, from a business or personal perspective, which charities to support.  I know how we have always worked ours donations in the past, of course recent changes in our situation will likely result in a shift.  One of the comments I received, was a little eye opening.  The person stated that he only donated to people/causes that supported him in the past.  In simple terms, he donated only to those that donated to him when he requested it. At first my thoughts were that this was somewhat childish, and would only result in a “you scratch my back, I scratch yours” mentality.  But, there is a valid point – “you took the time to support me, knowing that many people asked for your donation, thank you.  I would be happy to return the favor”.   I have always in the past, donated based to causes that had direct impacts on family and friends.  So, I may have occasionally not returned the favour – the good news – I didn’t really ever ask for funds much in the past, so I think I am on the good side of that discussion.

Although, I don't think I told you anything you don't already know - or tell you any answers, unless you are looking for one in which case, support Bladder Cancer, and the Cruise with a Cause (coming soon to a facebook page near you).  I am curious to hear what people think are calls to action that actually get their attention. 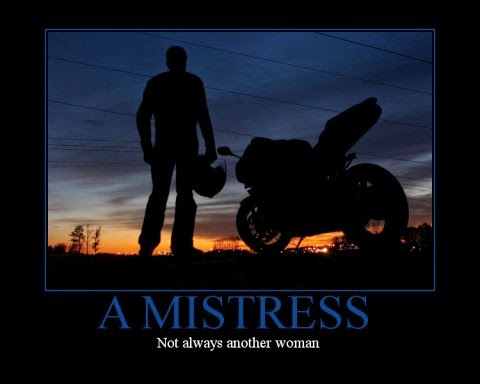 Enough about money – guess what, spring is around the corner, the motorcycles started easily the other day, and it is only a matter of time before I am on the road.... the wind in my hair, the bugs in my teeth, and those rocks being thrown up by trucks.... then I will have some better video to show you... I just need to buy a better camera.