August 11, 2015
I wanted to take a trip, and make it my version of “One Week”.  There was no inspiration from a Tim Hortons cup, or other similarities to the movie, and Cancer news is already over a year old.  But, I want to take advantage of every opportunity to take advantage of life, before I become a patient that can’t.

Road trips for us are fairly common, we drove most everywhere over the years, now as the kids have moved on to their own places and lives, I do more by motorcycle, and hope to continue doing so for many years to come. 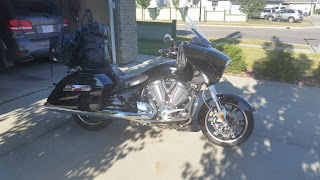 I delayed my start by a day, mostly due to heavy rains on Plan A departure day.  In my situation, starting a vacation cold and wet wasn't part of the plan...   The road was closed for a bit west of Jasper... so I stopped in line with everyone else.  That is when the silly tourist questions started - the minivan in front of me was a rental, a European gentleman exits and comes to ask me "why are we stopped?"  I told him that we just passed a sign that said "accident scene, so I guess there was an accident".    This was not the only time that people approached me in a traffic lineup to ask me why we were stopped.  Do I look like a knowledgeable person? 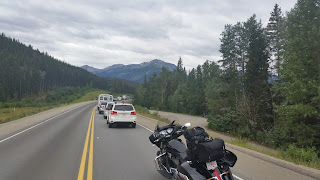 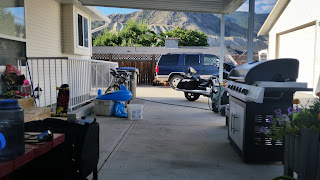 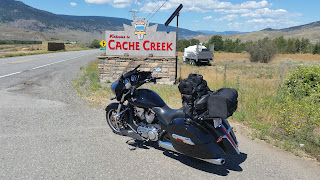 Getting up to the farm was good, spending the time mostly disconnected from the world, first night watched a thunder and lightening show.

The next day, the effect of the show were seen.  This became known as BCs Coldstream fire. 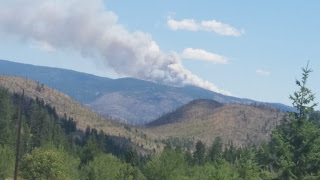 But, back to the details that compare the ride to the movie... I had the opportunity to get my photo taken with some really big things... like the worlds largest skis..  Anson being into skis, I made a point of stopping here to show him. 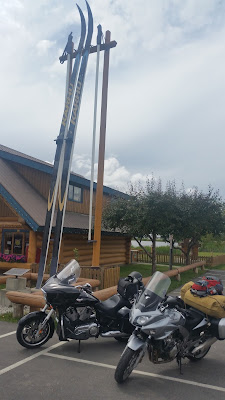 .
This stop potentially is what put us behind an accident that closed the road for many hours... and precipitated a many rainy hours detour.  Of course detours are always part of the fun of a road trip - although we could have done without the down pour. 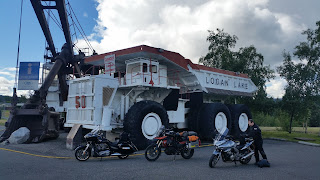 and we got to see this really big truck.....  I got to visit twice, and seeing as it was at the end of a very twisty road - I took Anson there.  This was a day he rode without all the extra baggage, so he was feeling kinda "sporty" and probably pushed his bike (and himself) more than ever before.  I think so anyway based on the smile he had on his face.
The great part of this trip was the people that came out to ride with me, and join me on the adventures.  Since the cancer diagnosis, some friends have gotten further away, but some of the good friends have gotten closer - they know who they are, and how much Sherry and I appreciate them being a part of our lives. 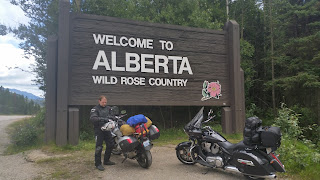 Because I have had a great time riding in the last month - I will now start typing another blog - it will be about a charity ride I attended, shortly after I got back from BC called the MPNMRR.  Check them out on thier website here and their Alberta facebook page here