October 08, 2015
I am enjoying this time to recharge and rebuild as I am on a break between cycles of treatment.  I ended up with an extra 2 months in between, but more about that in another update.  This gives me time to volunteer or find things that I can look towards the future for. I have found that my future is still a pretty blank canvas, so having something that I can help build its future, it pretty cool.  This means that charity rides and motorcycle events are actually a pretty big deal in my world these days.  I have the time to work on planning some - so I do.  I also try to attend as many as possible that I can.

One of the biggest events that I was a part of, was actually a small number of bikes - the Cruise with a Cause (CwaC).  Founded by Graham Wardle and Don McLeod only a couple years ago, this year was the third ride that has been done.  I came on board last year to help out, when their planner Peter Groenlund, was seriously injured in a crash 8 weeks before the 2014 ride.  The CwaC has grown substantially in the 3 rides it has done.  The format is pretty simple - riders from CBCs hit TV show Heartland, ride along and have fan interactive events in a number of locations.  Small number of riders, but big impacts all around.

One key facet of all motorcycle rides that I have participated in, is the community building and support for motorycle events, other rides will be discussed later in the post, but I want to touch on the Cruise with a Cause first.  One of the key tenets that was desired was to help build the local community.  This year we made a point of seeking out charities that were resident in the locations that we stopped and visited.  This helped us ensure that funds raised in a community - stayed in the community.  This was a lesson that I realized when living in the Northwest Territories, as many large charity events can't gain a foothold (such as Ride for Dad etc) because the communities in the Arctic, are not interested in sending money to charities in the south, that won't ever help people in the Arctic... charity begins at home.  These challenges opened my eyes to fundraising and I totally understand and agree with them.

This provided me the opportunity to change the perspective that I look at charity events from, and I am happy to say, that when I attend a charity event, I do look at it differently.  Both the supported charity of an event, and the community behind the event - makes a difference.

I will do a seperate writeup all about the CwaC, the cause, charities sponsors and events that made up this years ride soon, but for now I want to address some of the other rides.

My year started by helping Belt Drive Betty hold the very first "Wheels for our Wounded"(facebook page here) poker run.  As this was the first event held in this name, organized by the group of volunteers, it wasn't without its challenges.  Mostly the concerns were - how many people could show up? might show up? and how will we be prepared for them?  In the end, we were ready for many more than actually showed up, but we were also happening the same time as other events - this made me think about event scheduling - and how to grow the crowd that would attend.

Motorcycle charity events are not really a Field of Dreams moment - meaning if you plan it, does not mean they will come (kudos to anyone that gets the 80s movie reference).  It takes years to build a following, and patience is a virtue (or so they tell me); so I have been spending a fair amount of time trying to figure out the best, most accurate way to build a brand around an event.  This is relevant to me as I figure out how or what I want to do if I have to grow up and get a real job if the military is done with me. Learning all the nuances of social interaction and the conduct of business in the civy world will be a fairly big step for me.

A number of events I attended this summer had a common entity - local K97 radio and their dude, Terry Evans(TWITTER).  He was at the Nisku Bike nights, and always on the scene of many events.  The motorcycle riding community is the largest demographic that gives to charity in my opinion - and it makes sense people that purchase a luxury item like a motorcycle, always love an excuse to use them - so, include a reason for it to feel good on a tuesday night - win win for everyone.  Plus the burgers at Blackjacks were a steal at 5 bucks.... that became a part of my menu planning - even if I couldn't do the poker run - it was supper for me on nights when Mrs was at roller derby.

One event that I was a small participant in - was the Military Police National Motorcycle Relay Ride (say that 3 times fast) or MPNMRR for short (really still a tongue twister).  This coast to coast ride made a couple stops in Alberta that I was able to attend. (website here) I was able to attend events in both Edmonton and Cold Lake, where I participated in a poker run where I had a chance to win a Victory Cross Country - I thought that prizes for events couldn't get any better.  Either way, between the 2 Alberta events, almost $40K was raised for the Military Police Blind funds for kids.  I didn't win the bike, but I had a great time.  I was recently informed that on Sept 29th, the lead hand for the Cold Lake organizing committee, Gord Mackay passed away.  He will leave a legacy that will be remembered in future events, and will be missed. I had just met him at this years events, and he was a man that was passionate about fundraising.

As a currently serving Armed Forces member, I also try to attend events by Veterans groups.  One event that really sticks out in my mind was the Erin Doyle Memorial Poker run in Legal, AB.  Erin Doyle was from Interior BC, like me, and was posted here to Edmonton when he deployed overseas.  Just after I moved to Edmonton, I found out about the 2014 event, but couldn't attend.  Mostly because I had just started BCG treatments for my Cancer - and I didn't know where Legal was.  But I got to attend this year, and I am glad I did.  The Veterans Paratroopers Motorcycle Club (VPMC) is a group of like minded individuals that organized an event with laserlike focus and precision (I love that shit).  They bring out the small town and bikes line the street, all to raise money for the Kids with Cancer society (check out my video where I admit that I feel like a whiny bitch compared to the strength these Kids show).  Terry Evans has been their Honorary Road Captain for a couple years now, and this event has a great following.  This is an event that people make space in next year calendars for, immediately following the completion of this years event.  I know that I have a note in my google to remind me to keep an eye out for the poster.  This years event was a huge success, and I can only imagine what next year will bring.

All these events happened before I went on my week long mis-adventure ride in the rain, also called CwaC.  This allowed me to contemplate the many facets of organizing events, the challenges and effort required to overcome those challenges.  That again spoke to the dedication of many riders that attend and organize these events.

When I returned and dried out, I got to attend the K97 Music Therapy Ride(Terry Evans was there again too).  I was happy to attend this one, as one of the CwaC founders Don McLeod, is a musical kinda guy,(but I can't carry a tune in a bucket, so I play the radio as my musical instrument) so this would be close to his heart and again - its money for the kids... who doesn't want to help raise money for the childrens hospital.  But, this event was where my mind was really kinda blown away.  Same as other rides, communities were very receptive and shut down the main street, near the largest sausage ring... google it yourself to go see it.. I won't tell you where it is, you can go find it to go for a ride.  The biggest thing - they gave away a brand new motorcycle - to one of the people in attendance.. you had about a 1 in 300 chance of winning a brand new ride.  That shows how long term partnerships allow you to build outstanding events.

Now, not all events that happen have been around for years, take months of planning, based on long term legacies, or attached to a large National program.  Sometimes the motorcycle community just comes together in a time of need.  This was highlighted in BIG NEON lights after the recent tragedy in Southern Alberta, where a young girl and her father were needlessly killed.  The riding community, lead by Troy and Angela from Ride Stop & Go, (Facebook) put together an event with only a few days notice that brought bikes out by the hundreds to raise thousands of dollars to help build the legacy of 2 year old Hailey, which is absolutely outstanding.

Events like this make me glad to be a part of the riding community.  In my opinion, riders mostly are looking for an excuse to ride, suggested destination, and if you make it about charity and giving back to a community - even better.  This has never hit me closer to home now that I am diagnosed with a condition that is supported by a charity.... more about the Bladder Cancer Awareness next year, the walk already happened this year. 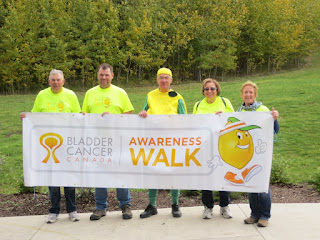 Until next time, thanks for reading.