October 15, 2015
I was listening to a podcast from a fellow Cancer patient recently, and he was recounting a story that he heard on another podcast from comedian Norm Macdonald.  When a person dies of Cancer, it doesn't really really count as losing the battle, as technically, the Cancer that is withing his body, dies to.  So, this counts as a tie.

Well, my old friend Barry forced Cancer to settle for a tie recently.  After 17 years of living with Cancer, it returned with a vengance this year.  He was 76. 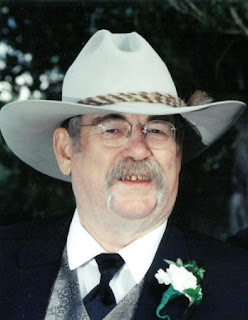 I first met Barry in 1981, when they moved from the big city to the sprawling lands of the Lower Hat Creek Valley, in the shadows of the cliffs of the 3 sisters.

There are many fond memories of Barry to always keep in mind.  The first that comes up for me is his story telling.  I think most will agree, that when Barry told a story, he was fully involved in telling the story, his actions and animations are what truly made his stories more enjoyable.

Many may, or may not, be surprised that the events that resulted in him being awarded a Medal of  Bravery from the Governer General in Ottawa, had not been the first time he ran towards, not away from a burning house.

A big facet of Barry (and his wife Donna) was that they were never limited by what they could do, or would do.  They have done everything, with a smile and always enjoyed it.  In my time of knowing Barry as I grew up, he was a cowboy, bartender, heavy equipment operator, security personel, reporter, editor, and politican.  I am sure there are a few in between that I don't remember or know about, as I have been off galivanting the world in the Canadian Military for the last 25 years.

Like me, Barry did not want his Cancer to be a big dark scary secret, I think that it is for the best that way.  That way more awareness about who is fighting cancer, and how treatments are going is available.  More awareness could bring more visibility to charities supporting Cancer, which should lead to better treatment options being developed.  When Barry was first diagnosed, his stories were quite entertaining, mostly because he completely amped up the stories to help most grown men cringe in fear.  I have discovered that I enjoy doing the same thing, with my cancer stories to my friends over drinks.

I was happy to get to visit Barry shortly before he passed, and have only good things to state about the Hospice Center that he was residing in until the end.  The facility was very nice, and it allowed him the dignity to pass with Donna and his dog Tait by his side.  yes, this facility allowed Tait to stay with him in the room.  Mostly because Tait is very well behaved, which also says volumes about the care and treatment of their animals over the years.  If you are ever looking for a Kamloops home to support, I do have a recommendation.  The Marjorie Willoughby Snowden Memorial Hospice Home provided them with outstanding support.

That reminded me about living on Cornwall mountain with Barry, who once parted ways with his Jackass Cloudy - who really thought he was a dog (in my mind).  I remember when Barry would try to sell Cloudy, and when loading him into the buyers truck, would state - if he doesn't work out, bring him back and you will get your money back.  Cloudy came back, and lived like a dog, curled up on the porch at the cabin, or trying to lay beside you as we were all sitting in lawn chairs around a fire.  Barry did enjoy his pets.

Anyway, Barry will be missed as he was a big part of my life.  Many times the jokes were made that people thought that Barry and Donna were my parents..... mostly because that is what Barry would tell them if my parents weren't around. Which always made for the nervous laughter from those that didn't know Barry as we did.