Its getting harder to find a good group of people

So my first part of this was talking about how challenging it has been for me in my new location to try and fit in.  Then in the second part I comment on how society has changed so that people are less accountable to those around them.In this third part, I will point out what the (hopefully) logical conclusion from some of these statements.  Most of it is my speculation and connecting some dots on things that I have read, that may not necessarily be connected.

I would like to state that this is almost an interesting conspiracy theory.If you need to read up on the first couple pieces of this discussion –Part 1  Our group in societyPart 2  Network vs community

I will be linking the source material in the text where it is relevant.  I am finding in editing this that its a little harder to track my thoughts than I initially envisioned.

Through reading many articles and blogs, I have come to the conclusion that I am not alone in my thoughts.  There are many people in a similar situation as myself – slightly frustrated with the world, and trying to rebuild what was once considered a good plan for my future life.  Cancer has that impact – it makes you re-evaluate everything around you – including who and what you surround yourself with, as well as what you will spend your personal energy on.

Many articles demonstrate that people are now looking for their new community online – which starts as a network.  It becomes easier to find people there that will share the same interests, even if they aren’t in your nearby community, they might not be far away, but you have found them easier.

I have talked about Veterans groups before and how there are many, many, new groups popping up.  One article (here) points out that many Veterans desire the structure that they used to have in service, so the natural migration is towards Motorcycle Clubs (MC).

Why does a tribe mentality help these things?Because (as mentioned in part 2) if you were seen doing something like driving on the sidewalk to pass a car, cutting them off, fingering them, not stopping to help at an accident, by a member of your tribe – you would be held accountable by them.That is why the MC culture is increasing in popularity (my opinion anyway).  There is a group of people who want the sense of accomplishment from being permitted to be a part of a group that holds them to a higher standard with a code of conduct, than the rest of society.Now, many people think about the “Sons of Anarchy” TV show when I use the term MC – but there is more to it than that.  If I need to explain, you won’t understand.   But it becomes about the actions and accountability of the group, to the group, by the group.

There are a number of groups that are not MC related, most likely as a result of not riding motorcycles, but the structure and culture are the same.

But what happens when a group of people decide it is just easier to form their own group.

In today’s world, it is fairly easy to form a club/association.  The online community allows to you find a group of people in almost exactly your similar situation – people who haven’t found a home in the existing group culture, but sharing everything from religious, conspiracy, or political beliefs to hobbies, trends, personal preferences.

That is why you will see the growth of groups that might be considered abnormal in Canada.  A group of people who build a community on social media, have now met up, and formed a group in person.  Actions speak louder than words, and they are choosing to move from the keyboard, to the streets.  Here are a couple more articles in print and video.

Now, not all of them have the comedy value of the Western Canada separation movements (although BC and Alberta do not get along right now), flat earth society groups, chemtrail and other tinfoil hat groups, but some are actually taking action to plan on protecting themselves and the Canadian way of life.

Here is a podcast and article about an Alberta group doing just that.

Recent actions – such as the current court case in Quebec, where a lone gunman decided to take matters into his own hands based on his perception that immigrants were going to take over Canada by force, show that more than a few citizens of our country share these fears.

Why does this happen?I can only make a connection based on what I see in Veterans groups.  Within many groups, there are people who – with personal differences, or expectations – don’t like what the group is doing, how it is managed,  who is running it, or the effort it takes to be a part of the group etc.

In theory, the harder to get into a group, the better it is – right?Although many times over the years, I have made the joke about – “do I want to be a member of a group that is willing to have me as a member?”

That makes it easier for a group of people to splinter off and form their own group.  Many of these groups don’t survive very long, as like many Veterans groups, it becomes “my way or the highway”, and many people just leave.Differences within groups, or between groups is not uncommon.

So – back to the point of this discussion and how it fits into the blog series.

When people, like me, are looking for groups of like-minded individuals, the options are increasingly plentiful.  Social media and websites such as meetup.com has allowed me to select different groups:  Veterans groups, Veterans who ride, Veterans who support charity events, riding groups that don’t support charity events, riding events depending on your brand/style/look of your bike/gear, Veterans that want to lobby the government, Veterans annoyed with Veterans Affairs and the list goes on.  It just comes down to the common ideals that unite us.

Many of these groups all have unique rules associated with being accepted and staying within this group.  After all, social media groups are free – so no real commitment or impact.  Some are simple, others are odd, but rules are rules – right?

What makes things different is when the groups come outside of social media and the commitment level increases.

Outside of the online community, the considerations of groups changes.  A person who has found an online community of any kind, now has a group of like-minded individuals.  Those associations can form in many collectives of opinion.  Some examples of these groups are included in the links sprinkled in the article.  I am not trying to be alarmist, or promote my tin foil hat store, but social media has allowed for groups to recruit, promote, or otherwise develop their cause in manner that hasn’t been seen before.

My conspiracy theory, and prediction of the future.

As social media continues to give the more wingnut among us a platform, the number of groups, empowered by their online strength, will start to put actions to their words.  The question then becomes – how will the groups control themselves?  We are seeing that people are willing to split from groups that aren’t exactly what they envision, so the number of groups will increase.

I could go on about the strategy of forming groups, why groups don’t survive very long, but that might become a future blog post series – because I have an opinion on that. How to do things better than how many groups are currently organized during their start-up and launch is something I have studied quite extensively in the last few years.  I believe there is a science to it – but again, that is for another blog series.

For me the interesting part will be to watch how these groups form (and I believe they will), but how they deal with their leadership challenges.  External inputs on a group are just as hazardous to group health as internal conflict, and social media will fuel the feelings in many groups or individuals.  I have seen individuals within groups become disenchanted because the group wasn’t doing enough of what they had joined the group for.  What will happen, when the next disenfranchised group member of an armed militia group, wants to make, and take, a group to the “next level”?

The disconnection of a community honour code, an unaccountable society without perceived consequences, and the ease for like-minded individuals finding each other online can become a scary mix (in my opinion).

I don’t know how this will end up, but I wonder where this current path of society will take us.

Thanks again for joining me in my ramblings.This 3 part series did spawn a 4th installment that will be posted mid May.  It came to mind mostly during the writing of part 2. 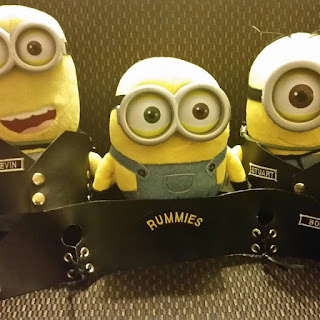