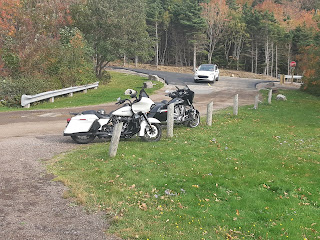 It has been awhile since I just gave a straightforward update.

I keep thinking that not much has been happening, but the reality is - more has changed, than has stayed the same.
I did a motorcycle ride around Cape Bretons Cabot Trail last weekend, and while letting the fresh air and wide vistas clear my head, I realized that I have to get some things back on track.

By stating I have to get things back on track - that is on me.  I have to get my act together and start doing these things.  As it is said, the journey of 1000 miles begins with the first step(or something like that).  That means - shit isn't going to happen, until I start making shit happen.

I can't figure out why I can't blog as much/write as much right now.  During my final months in my last role in Shearwater, I wrote blog post style emails to the entire unit - over 80 times in 4 months.  But, I can't get out of my own way to blog more here - weird...I need to fix that.  At first I thought it was all about not having topics to talk about, but I have lots of things to talk about, I just need to put my thoughts together, then - rather than make one long post every couple of months, do shorter posts about a single topic.

So - that is the plan.
This post will tell you about upcoming things.

It is official that my last day as a member of the Canadian Armed Forces will be 5 April 2021.  That will give me 31 complete years (and a few extra days).

I mentioned VRPSM in my last blog post, and that is what I am doing right now.  It consists of 4 major components.
School - Marketing course at a local community college
On Job Education part time - Ol Biddy's Brew House
On Job Education part time - Cobblestone Leathers
Working as part of the National Communications team for Bladder Cancer Canada.

This is keeping me really busy.
I will do a few individual blog posts about why and how I ended up with those things later.  But, I will start drafting the posts now.... and work on getting ahead - which should get explained in the next post.