Since my own diagnosis, each loss is a touch harder.We lose closer friends and family.We wish we could do more for them, and the hurt is a little more.

The thing that makes it more challenging for cancer patients, is that many know that the battle will eventually end with a no win – tie game scenario.We can talk about that, and do talk about that. There is a period in every cancer journey, where death and dying is part of the main vocabulary. Sometimes it is at the beginning of the journey when the greatest uncertainty is there, sometimes it is near the end, and other times – the entire journey.Another cancer blogger – recently posted about this in Nancys point.I post about it occasionally – as I have a song that really touches me – Thunder – No one gets out alive

Hutch wasn’t afraid to talk about it, or make jokes, about his treatment.We got together often either at the Cross Cancer Institute, or a hotel bar to discuss his “getting gooped”. We made jokes about the lines on the room floors that people have to “stay this far away” during some of the more nuclear treatments.We celebrated the results of scopes, scans, and cameras shoved in various body orifices, in a manner that probably scared the others in the bar.

We would occassionaly change the topic, reverting back to motorcycle rides/destinations and plans, or the ever comedic military stories, that happened in the days before social media, political correctness, and people being offended by everything. Our laughs usually meant that we had our area of the pub to ourselves, with others going to the furthest away tables – yes, we were those guys at the pub… laughing and having a great time….I know, how horrible of us.

Being a Veteran, a rider, and a cancer patient – the concept of Brotherhood has many intricacies that applied to Hutch. He had some belts hand made, to give to some of us. Veteran proudly stamped into it.

I think back to the last couple visits I had with Hutch.Last July as I prepared for my move to Halifax, I wanted to go on a weekend ride – didn’t have a destination planned, just thought – go “over there”. A friend said he could come along and away we went.5 hours (ish) later, I am texting with Hutch to find out what site number he had in at the campground, Black Diamond Alberta. Color us surprised when we roll up and discover the social faux pas that we were both wearing the same shirt. (post feature image). We laughed about that over a beer, including talking various things – his new bike, possible surgeries etc.

The next day, after a visit to the Nanton Bomber museum, I rendezvoused with Hutch again for my last Highwood pass run before moving to the east coast – a number of clips are included in my YouTube video. He is the white Harley that I am following occasionally.Anyway, back to today.

In miitary cememonies and dinners, there is a place setting for those that can no
longer attend the function.There is a toast that is read as part of the dinner, and there are a couple components that ring true the most.The slice of lemon – to signify the bitterness of fate.I could write a few blog posts about that.

But the one that hits the hardest:“The glass is inverted, they cannot toast with us at this time.”I have a friend. He really has the world convinced he is a bona-fide asshole. But a few of us know the truth.He was the friend who came along to meet Hutch on our social faux pas day, and he also has his own cancer journey.

When I shared with him a recent Hutch social media post about final days, he did something that only someone that truly “gets it” would do – went to visit Hutch, to see if he wanted a beer. 3-4ish hours one way.When I was told that Hutch had passed, more than one person told me about that visit, and how much it meant to Hutch that someone else truly understood, and restored some faith, in Brotherhood.

Although we cannot toast with Hutch now, eventually again we all will.As the song says – no one gets out alive.Until then, we toast to the fallen. 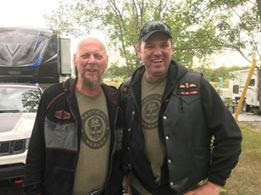